What would you do if you witnessed a tragic accident? Would you stare in shock? Call an ambulance? Or rush to the aid of the victim? It’s a tough question for many people to answer.

Unless, of course, you’re a nurse.

When you’re a nurse, your gut instinct is to help. Life-or-death situations are what you train for, after all. Just ask Paula Thomson, the Administrator at Bonnie Brae Nursing Home and the soon-to-open Earls Court Village Long-Term Care Facility. In 2010, Paula witnessed a devastating on-ice accident at a Junior C hockey game between the New Hamburg Firebirds and the Woodstock Renegades. At one point during the match-up, two players got into a bit a scuffle, which required Kevin Brown, a linesman at the game, to step in and diffuse the situation. Except, at the exact moment that he approached the players, they both tumbled to the ice sending limbs and blades flying in every direction… including directly at Kevin.” 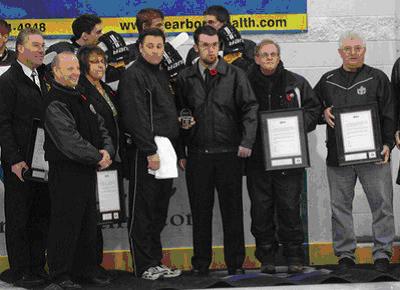 I kind of remember,” Brown said in an interview with the Sentinel-Review, recounting the fight that changed his life. “I didn’t see the skate coming up but I knew I had a job to do and break up a fight. I remember being on my knees and bleeding.” This is because Kevin’s carotid artery had been sliced by an errant blade during the fight. Confused, Kevin skated over to the New Hamburg bench following the incident, where he immediately collapsed. He would have died if it weren’t for the smart thinking of Firebirds’ trainer Greg Henning, Woodstock trainers Dan Dukes and Bert Cowell, and Nurse Thomson.

“Kevin had his hand clasped over his neck and you could see the blood pulsating from him,” recalled Thomson in the Sentinel-Review article. Forced to improvise, Thomson quickly cut the straps from Brown’s helmet, making sure to keep pressure on his neck. “The trainers did a great job maintaining pressure,” Thomson said. “The group of us worked very well together keeping calm and doing our best to ensure Kevin had a fighting chance once he reached the hospital.” Nurse Thomson, along with the trainers, was later recognized for her efforts with an award from the hockey association.

Kevin, who now has a large scar on his neck as a reminder of that fateful night, suffered a stroke due to massive blood loss. That being said, he could have lost his life if it wasn’t for Thomson’s immediate response.

While Kevin doesn’t remember a lot from the night of the injury, Nurse Thomson knows that it’s a memory she won’t soon forget. “I couldn’t sleep the next couple of days not knowing how Kevin was,” said Thomson. Worried, Nurse Thomson tracked down the cellphone number of Kevin’s father, Murray. “When Murray answered the phone, I told him my name and that he probably didn’t know who I was. His response was, ‘yes I do, you saved my son’s life.’”